Songs in the Key of Stevie 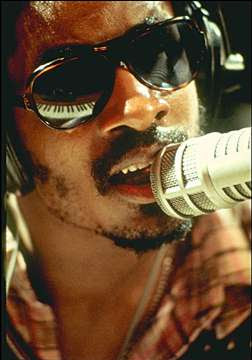 On this day in 1977, Stevie Wonder's funky gem I Wish climbed to the top of the charts. This R&B throwback-cum-throw down was the first of two No. 1's from his 1976 opus, Songs in the Key of Life (Mowtown). With its release, it became the first LP by an American artist to debut at No.1, where it remained for 14 weeks.

To say Wonder hit his stride after wresting full creative control from Motown, is an understatement, and Key of Life the proof. The album was/is the crowning achievement for Wonder, whose unbridled talent and limitless creative ambition helped to rank it as one of the most successful and accomplished albums in American popular music.

The song also happens to be one of my all-time favorites. I remember it vividly from my childhood. It was the first straight-up funk song I ever purchased (on 45). The consociation of his simple, boyhood recollections accompanied by that nasty-ass rhythm track, still blows my mind. The horns–so crisp, they could split a speaker. And the bass line, off the hook, literally off the register. To this day, I still can't listen to the song just once. It mandates repetitive plays.

To me Stevie Wonder at his pinnacle was the adroit magician. I know what I heard, but I could never surmise how he did it, and songs like this still leave me bewildered.

The Making of Stevie Wonder's I Wish (YouTube, Date Unknown)