King for a Day 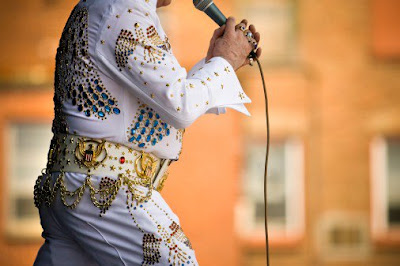 With only one entry left in Actual Monkey's Top 8 of '08, we take a timeout to pay tribute to The King on what would have been his 74th B-day.

I like Elvis the Brand, but not Elvis the singer. Actually, he was more than just a brand, he was pop music's first Megabrand, and that status eclipsed Elvis the man long before he was inhaling barbiturates by the fistful and shitting his jumpsuit.

His train wreck of a life was one of the first on full public display, for all to gawk at and some to mimic. Hell, the only things that separate Britney Spears from Elvis are 50 pounds of belly fat and six feet of dirt.

But I digress. Eventually, as with all successful brands, they become parodied and are reduced to a commodity.

That said, here are some discounted cuts of the King (a little gamey, but still delicious):
Words
You Don't Have To Say You Love Me
Funny How Time Slips Away

Posted by Actual Monkey at 2:50 PM