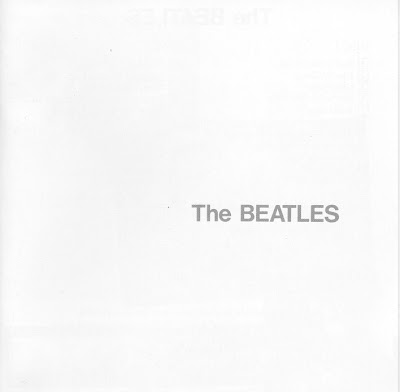 What an amazing thing, this Blogosphere, it allows for travel through time and space. After a week of Post Punk posts, Actual Monkey shifts gears and decades to celebrate the 40th anniversary of the Fab Four's watershed masterpiece, known as 'The White Album', released on this day in 1968.

Much of the album was conceived and written while the Fab Four were on extended holiday with the Maharishi Mahesh Yogi. This period of enlightenment and introspection yielded some of the most personal work in their entire repertoire. Unfortunately, this album also marked a clear change in both the dynamics of the music and the band. It was the protracted beginning of the end. The album, simply titled 'The Beatles', with it's stark white cover portrayed a brevity of plurality and gravitas, yet ironically was less a cohesive, collaborative work and more a collection of individual songs, by individual writers, using each other as backing musicians. Even Ringo got in on the act using the others to support his contribution 'Don't pass me by'.

The changes don't stop there. The approach to recording 'The White Album' was also different. The introduction of outside musicians on a Beatles record was also a first for the lads. Eric Clapton took the lead on 'While My Guitar Gently Weeps, while session player Nicky Hopkins lent his talents to 'Revolution'. No coincidence that the emergence of Yoko in the studio (read: carnal sin for bands- girlfriends at recording sessions) also added to the strife. All well documented in 'Let it Be'. The division and discord that festered among the quartet was not limited to the band itself. For a group that utilized the studio as an instrument, the departure of engineer Geoff Emerick and spotty appearances by Sir George surely added fuel to the fire. 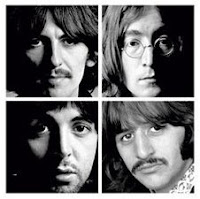 's impossible to hear the problems the Beatles experienced during the recording of 'The White Album'. As far as the music, the entire album appears seamless and magical in a completely disjointed sort of way. And although at first blush there might seem to be a lot of half-baked ideas and snippets of works in progress, there's not a bum track to be found. That might seem an understatement (or overstatement, depending on how much you like the LP), but I think it's worth noting. So focused was each member on their individual compositions, that the resulting achievement enables it to appear to be a homogeneous effort. Remember these four were writing and rewriting the rules of as they went along. There was no wrong answer. Even John's throwaway 'I'm So Tired', packs a punch in the span of just two minutes. Brilliant stuff.

If I had to pick sides, I would go with one and two. That said, some of my faves include: 'Dear Prudence', 'While My Guitar Gently Weeps', 'Everybody's Got Something To Hide Except Me and My (Actual) Monkey', 'Blackbird' and 'Mother Nature's Son'. Although I might seem partial to Paul's tunes, John's expressions on 'The White Album' are to me, his most personal, and his best during his tenure with the band. As usual, George was limited to his quota of two songs, which, in the case of this double LP amounted to a whopping four. Of those, the odd little commentary 'Piggies', demonstrates a distinct stylistic departure from his other offerings.

While I was previewing it prior to this post, I remembered an observation I made years ago. It was a comparison of John and Paul's different styles of writing, specifically the fact that John had most of the edgier, more vitriol stuff while Paul wrote the more dainty, proper pop songs. But, in fact, the hardest song in the entire Beatles catalog is by far Paul's 'Helter Skelter'. This track was so incendiary it proved ominously inspirational, just ask Charlie Manson.

If you are any type of regular visitor to Actual Monkey, you know I am preaching to the choir when I say this LP is an absolute must, a mandatory cornerstone of any music lovers collection. It is still, 40 years later, worth every penny of your hard earned cash.

Turns out The B 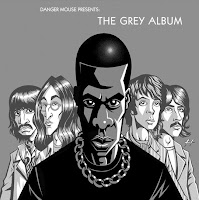 eatles weren't the only ones who used each other for backing. Fast forward 36 years. DJ Dangermouse creates a mashup, combining the a capella vocals from Jay-Z's 'The Black Album' with just about all the songs of 'The White Album'. The result, 2004's 'Grey Album' is anything but. Not a fan of rap whatsoever, I admire and cherish this technically creative gem. Unfortunately, the execs at EMI didn't feel the love, and had it pulled from every known site on the Internet. Those corporate guys...pure gansta. I think it deserves an Encore.


George Harrison- While My Guitar Gently Weeps (Concert for Bangladesh 1971)

Posted by Actual Monkey at 6:20 AM