'Cause you got the best of me

As the mercury approaches 90+ yet again, AM features another summer scorcher from days past. What I believe to be her best song, Madonna's Borderline. The final single released from her self-titled debut, this song and accompanying video really helped put her over the top. There wasn't a boom box or Blaupunkt that wasn't blasting this song in the summer of '84, and her lucky star, which had been rising was beginning to go supernova.

Written by Grammy winning writer/produce Reggie Lucas and mixed by Madonna's then boy- toy, John 'Jellybean' Benitez, the song was released as a single in the US on February 15, 1984 and slowly made it's way up the charts, peaking at No. 10 on the Billboard's Hot 100, becoming her first top ten single.

And you pretty much know the rest of the story. 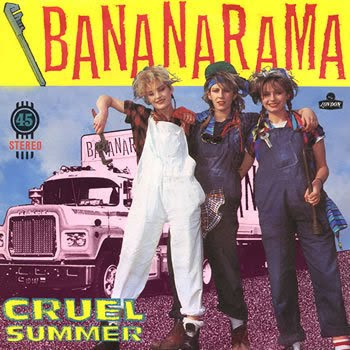 About a week ago, while down in the Village and suffering another 100+ degree Manhattan summer day, I was reminded of the summer classic by the all girl, brit-pop trio Bananarama, 1982's Cruel Summer.

The video was filmed in and around Greenwich Village and the Lower East Side, back when it was sleazy, dangerous and fun (and gas was $1.48 a gallon).