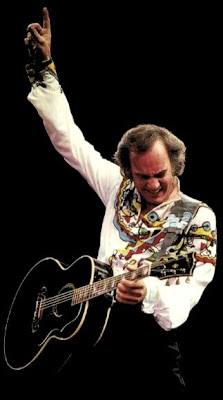 Tis the season. Well at least it used to be. Between Black Friday and Cyber Monday, the true spirit of Christmas has somehow been lost, pushed to the back shelf behind the fruitcake that no one will buy. Call me old-fashioned, but I like to keep Christ in Christmas. To this end, I've decided to dedicate some megabytes to Our Lord and some classic tunes inspired by and dedicated to him.

We begin with one of my all time favorites, Neil Diamond's 'Holly Holy'. Hands down one of the most spiritual rock anthems ever created. Heavily influenced by gospel, Diamond released the song in October of 1969, It went on to reached #6 on the pop charts.

Ladies and Gentleman, without further adieu, one of Brooklyn golden throats.

Posted by Actual Monkey at 5:57 PM No comments: