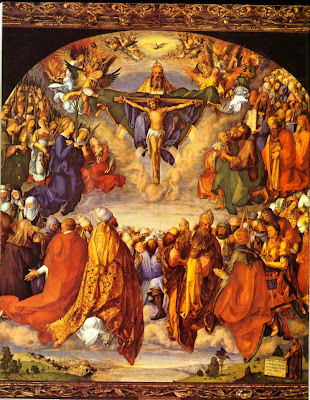 The red-headed stepchild of Halloween is the rarely celebrated and all but ignored All Saints Day. But we here at Actual Monkey want to change all that. It is time to repent, see the wrong of our ways, and say "Devil, get behind me."

All Saints Day follows All Hallows Eve (Halloween) on the Christian calendar, and celebrates the select few, known and unknown, who have achieved beatific vision in Heaven. It always falls on November first. Also known as Samhain, this three day event is one of several Pagan holidays that have been adopted into the Christian calendar over the centuries.

In acknowledgment of this lesser known but equally important holiday, I present a collection of saint-themed songs, from the known to the not so known.

The first is one of the most recognizable songs in the history of popular music, especially in regards to the genres of Jazz and Inspirational. It is the toe-tapping, hand waving, Sunday go to meetin' opus, 'When the Saints Go Marching In'.

This Dixieland classic has seen innumerable recordings, featuring countless renditions and dozens of arrangements. First and foremost though, it is the signature song of Satchmo. No one can say where it came from, but Louie Armstrong owns it. Everyone else just borrowin' it.

The lyrics are directly attributed to Revelations. Filled with doom and gloom, they possess the hope that we too, can be in that number when the saints go marching into heaven.

A tough act to follow, but the good Lord will give us strength.

On an all together different, and equally mystic vibe we have The Dead with their signature song, 'St. Stephen'. I think he was the patron saint of flashbacks. Not much to say about this classic, except it is still an amazing anthem from a band and a time that now seems like a million trips away.

Before this all gets too heavy, We have a proper helping of fluff, beginning with the Indie dance trio Saint Etienne. Named after the French futbol team, these kids had a few minor hits during the whole 'madchester' movement back in the early 90's. Best known for their catchy cover of the Neil Young classic 'Only Love Can Break Your Heart', they also scored with 'Nothing Can Stop Us Now'. 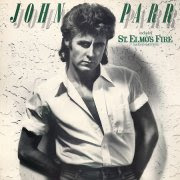 ertainly not least, we have St. Elmo, who I believe is the patron saint of Brat Packers. 'St. Elmo's Fire (Man in Motion)', John Parr's hit from the 1985 coming-of-age classic of the same name, was not nearly as famous as 'When the Saints', but equally uplifting, albeit in an archetypical 80's, self-absorbed sorta way. Was I the only one who despised Rob Lowe? Can I get a witness?

When The Saints Go Marching In
St. Stephen
St. Elmo's Fire
Only Love Can Break Your Heart
Nothing Can Stop Us Now
I Dreamed I Saw St. Augustine
Something Good

Louis Armstrong- When the Saints Go Marching In


Saint Etienne- Nothing Can Stop Us Now (2006 Bestival, Isle of Wight)

Posted by Actual Monkey at 5:37 AM

Before today I didn't see the connection between Louis Armstrong and John Parr - I guess I just wasn't paying attention.