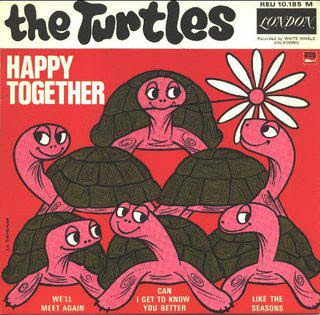 On this day in in 1967, The Turtles' Happy Together became the No.1 song in the country.

The southern California pop group founded in 1965 by Howard Kaylan and Mark Volman (later known as Flo and Eddie) rode the musical wave of the hippie movement with this saccharin-sweet diddy in the spring of 1967. That wave would later crest in the Summer of Love.

Not unlike the Byrds, The Turtles initial claim to fame was derived from a Bob Dylan song. A few years earlier, their cover of It Ain't Me Babe reached the Top Ten.

Happy Together was written for the band by Garry Bonner and Alan Gordon. The duo also penned minor hits for The Lovin' Spoonfuls, Petula Clark and Three Dog Night, but none would achieve the status of Happy Together.

It's interesting to note that this song knocked The Beatles Penny Lane out of the top slot and remained there for three weeks. It was the Turtles only No. 1 hit.


The Turtles - Happy Together by scootaway
Posted by Actual Monkey at 9:44 AM