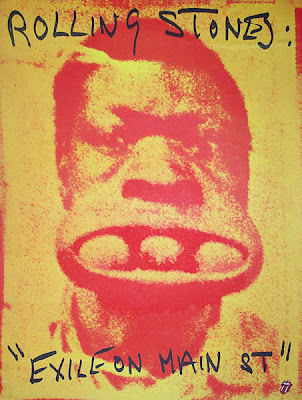 With the re-release of Exile on Main Street, I have been on a big Stones kick lately. I watched the entire week of Late Night with Jimmy Fallon dedicated to the revamped reissue due out tommorow. Not a big fan of covers or tributes (mostly because the artist covering the songs suck), I did find Sheryl Crow’s rendition of All Down the Line to be a standout. Mr. Nicole Kidman wasn't bad either.

I thought the Stones themselves were to perform on the show Friday, but I was gladly mistaken. Much better than seeing those old dinosaurs creak through Tumblin’ Dice was the excellent doc they showed about the making of Exile. What most would agree to be the end of the 'Golden Era' for the Stones, the Exile still kicks some ass. Two things I learned: Graham Parsons was a huge dope fiend and it is plausible to charge $140 for 40-year old music.

So back to the reason for this post. I am listening to the Stones non-stop and I notice while listening to ‘Jigsaw Puzzle’ from Beggar’s banquet, that it sounds an awful lot like a more recent song. Couldn’t put my finger on it at first, but after hearing it one more time I nailed it. Beck’s ‘Lord Only Know’ is almost a note for note copy, especially the end.

Kinda freaky, but not surprising. At this point, it’s impossible for rock to be original. Luckily, It’s reinterpretation is. I’ve attached the two tracks, decide for yourselves.

Even freakier is how healthy Keith looks now. He looks better now than he has in his entire life. Good docs? New liver? 12-step program? All of the above? He might look better but he's still somewhat of an incoherent mess, meanwhile Mick is all business.

Posted by Actual Monkey at 4:33 PM