Nick the stripper, Nick the necromancer 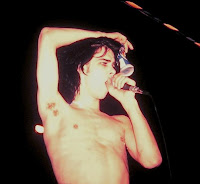 Cave's first band, The Boys Next Door, a quintet of school yard buddies playing disposable, tinny new wave was to become the nucleus of the influential Birthday Party. Transcending the No Wave movement, The Party lasted until 1984. In just 6 years, Cave and Co. had gone straight for the jugular, leaving heads shaking in disbelief of what had transpired. As unforgiving as Puriel, Cave casts aspersions as he assumes a Faustian persona. It was during this period, that he became the master storyteller. Telling and re-telling legends, his gift is never really separating himself from the story. Is he narrator, spectator, antagonist, victim? Or is he all those things, at once telling the story that he is inextricably a part of. His subject matter is often the wild, untamed frontier of America, and the underbelly of it's dark south. A sweat shop seamstress of history, he weaves his tales from the standpoint of a brooding, anonymous yet prejudiced witness.

Nick The Stripper- The Birthday Party

Stagolee- Mississippi John Hurt
Posted by Actual Monkey at 7:46 AM

Nice - love "Tupelo," and not only because the King was born there. Didn't know Mr. Hooker had one too.