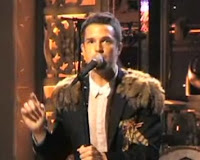 After seeing the Killer's killer performance on this season's premier of Saturday Night Live, it solidified two things I've known for years: 1. SNL sucks. 2. Most good new music is just repackaged old music. Not to discount any of these new bands, I really like a lot of the 'new' new wave current making playlists, albeit derivative of the classics. I guess it makes me feel like I'm still 'in touch' with the kids, but more times than not, it has me going back to my 'Living In Oblivion' collection and pining for the Reagan era tunes of my youth. So please join me in a little reminiscing. In with the old new and with the new old new.

First we have L.A's Sparks. Fronted by brothers Ron (Hitler Moustache) and Russell Mael, the group had a string of hits, most of which can be found on soundtracks to John Hughes films. By the time this duo peaked in 82', they had already been making music for 12 years (having launched their career on Todd Rundgren's Bearsville Records. After teaming with ex- Go-Go's guitarist/songwriter Jane Wiedlin on 1983's 'Cool Places', things cooled off for the band, and although they haven't charted since, they do still continue to record.

The second band, Classix Nouveaux was basically a one/two hit wonder band from England. Formed after the break up of the legendary punk outfit, X-Ray Specs, they charted as high as #11 with '"Is It A Dream'. I've included here, my fave, 'Guilty' from 1980.

Finally, we have the darlings of the recent post-punk revival, The Killers. These guys have done a good job maintaining/evolving a sound that started over 30 years ago. Lead singer Brandon Flowers alludes a certain je ne sais quoi, that to me, aligns him with the vulnerable, sensitive lead singer type that was a staple of almost every 80's electronic pop band. Kinda like a skinny Robert Smith without the big hair and all the makeup. Kind of wimpy, but it works.

One other thing. While electronic pop is currently enjoying a renaissance, SNL is not. The show is just awful. If not for the musical guests, it would be unwatchable. However, when the time comes for Lorne to mercifully pull the plug on Studio 8H, there will remain a rich musical legacy of some of the most outstanding performances in popular music history.

Posted by Actual Monkey at 9:42 AM