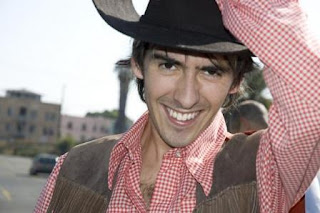 The only thing darker than growing up in the shadows of fame and fortune as the progeny of a mega rock star is actually trying to step out of those shadows and make a go of it in the music biz yourself. Just ask Jakob Dylan or Julian and Sean Lennon.

Now although the jury might still be out on Dhani Harrison, it appears he's on his way. A spitting image of his father, his music also bears a striking resemblance.

His story is not all that interesting. After studying to be an aerodynamacist, he abandoned his ambition to assist in the completion of Brainwashed, George Harrison's final release shortly before his death in 2001. And after performing alongside a stage full of rock legends at the Concert for George, Dhani all but disappeared.

Fast forward to 2006. His new (and so far only) band, thenewno2 release their first EP, aptly titled EP0001. It received mixed reviews, but featured the sublime 'Lord Lord', a follow up of sorts to GH's 'My Sweet Lord'.

This past August, the band released their first full length LP, You Are Here. I like it. I think it sounds like George Harrison with a beatbox. Thankfully, it's free of cringe inducing slop like 'Too Late For Goodbyes'.

Interesting to note that the irony of Dhani's station in life is not lost on him. The band's name is a reference to 60's cult TV series 'The Prisoner'.


Things certainly have changed from his father's days in the music business. I am fascinated to see the various cross-sell and marketing tactics implemented on behalf of new artists these days. Included but not limited to: maintaining the obligatory MySpace/Facebook page, iTunes banners, webcasts, licensing deals for video games and even a recent fashion spread featuring Dhani, all dolled up, looking exactly like his father!. I guess you do what you have to do.

As for Dhani boy. I think he might have a better shot then some of the other Rock Star Kids. But it will always be a challenge to find the direct sunlight. I can only imagine how far that shadow is cast and how difficult it must be to get out from behind it.

P.S. In case he needs a little help finding the light, check out dear old Dad and Paul Simon from SNL, circa 1976.

Posted by Actual Monkey at 9:23 AM