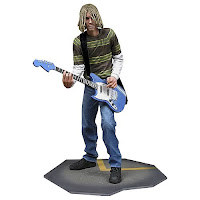 Tearing a page from Yoko Ono's playbook on how to sustain a positive cash flow from your dead rock star husband, Courtney Love quietly negotiated several licensing deals, exploiting the Kurt Cobain 'brand' while simultaneously lining her pockets. After signing away all of Kurt's integrity, creativity and hard work in 2006, much of the resulting merchandise has now found its way to store shelves.

Not unlike her lipo-suctioned abdomen, Love has sought to drain every penny possible from Kurt's legacy, selling off a 25% stake in his catalog, allowing his music to appear in ads and on network television. Oh, the Guilt.

As for the swag? In addition to the typical fare of t-shirts, key chains, and lunch boxes, additional licensing was granted to companies like Converse. Now Kurt's soul and your sole can be as one. The following is a product description for the Chuck Taylor All Star Kurt Cobain: tle's music scene, withdrawing into its grit and grime. He thought some of it made sense, but most of it didn't. So he turned to the only thing he knew for sure: his own music. Soon it became clear; the inspired songwriter with scruffy hair and stormy eyes had taken the underground grunge movement mainstream. Distressed canvas upper with Kurt Cobain signature, available in widths to EEE $59.99."

Enough to make you wanna blow your brains out.

P.S. Here's a little something she won't be cashing in on:

You Know You're Right

Posted by Actual Monkey at 9:17 AM

No surprise about the Kurt exploitaion - he was the closest thing Gen-X had to John Lennon. If you don't see the connection, you're just not paying attention.