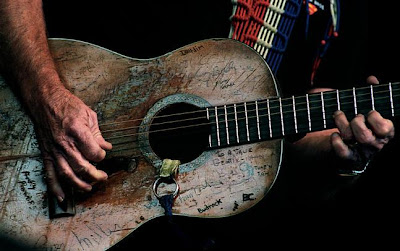 Purchased sight unseen in 1969, WIllie Nelson's trusty Martin N20, affectionately known as 'Trigger' has never missed a gig, performing with him in over 7000 shows.

As haggard as the Red Headed Stranger himself, Trigger has to be the most famous axe this side of Jimmy Page's double neck Gibson. It's recognizable patina is indistinguishable from Nelson's, both having been acquired from a life (mis) spent on the road.

A disciple of Django Reinhardt, Nelson's arpeggio style is partly responsible for the distinctive hole that has worn through the guitar's Brazilian Rosewood face over the past 40 years. He also identifies his use of a pick on the nylon-stringed classic as another culprit.

The foreseeable future holds little chance of either Nelson or Trigger slowing down. At 75, Willie maintains a vigorous touring schedule, equivalent to around 200 days a year. Still is still moving.

My guess is that one day Trigger will be buried with Willie, if not, his old friend should be put out to pasture. I'm sure they'll find some room for it in the Smithsonian.

Willie Nelson-Angel Flying Too Close To The Ground


Witness for yourself the slow, sweet decline of Trigger in the following vids, spanning 40 years of the Lone Star State's favorite son.

An homage to the master, Django Reinhardt

Posted by Actual Monkey at 7:10 AM

[ Nelson's arpeggio style is partly responsible for the distinctive hole that has worn through the guitar's Brazilian Rosewood face over the past 40 years. ]

According to John DeFoore, that ain't no rosewood face. That's a sika spruce, engleman spruce or cedar face. It's the back and sides that are rosewood.
Great old guitar though.