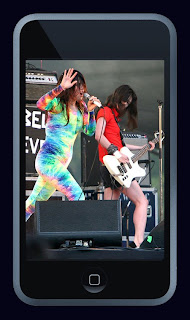 CSS, abbreviated from Cansei de Ser Sexy, is the Brazilian Electroclash troupe that enjoyed explosive overnight global success just weeks after the spot broke in 2007, propelling the song to a level of international recognition not seen (or heard) since Los Del Rios scored with the hip-gyrating, wedding-reception staple, the Macarena.

The iPod Touch ad has been viewed over 112 million times, subsequently pushing 'Music Is My Hot Sex' right up the charts. It reached #63 on the Billboard Hot 100, making it the highest charting song ever for a South American act.

But who are these guys and gals? The name of this San Paulo band, formed in 2003, translates literally from 'tired of being sexy', a quote from R&B diva Beyonce. Not unlike their nomenclature, the band is steeped in pop culture references. Driven by infectious beats, their music is unpretentious and fun. A killer live act, their innocent, juvenile approach translates well onstage. They also sing in both English and Portuguese. Bonus.

Fortunately, CSS isn't another international fluke (read; Bay City Rollers). They haven't fallen prey to the sophomore slump and their latest release 'Donkey' is filled with the acerbic wit, frivolous lyrics and shake-your-booty groove that has become the band's trademark.

With so many 'important' bands around, it's refreshing to hear some good old mindless pop. Reminds me a lot of the stuff I listened to in the 80's.

CSS- Lets Make Love And Listen To Death From Above

Posted by Actual Monkey at 7:19 AM