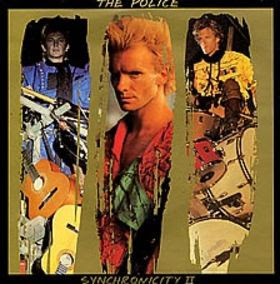 I always liked the Police, but disliked Sting. I find him to be arrogant and elitist, his music maybe not so much. And this brings us to today's song. Of the entire Police catalog, I think this is the most interesting and best written Sting composition. It also marked a departure in the sound of the band, almost an attempt at Prog rock.

The third single off of 1983's Synchronicity LP, 'Synchronicity II' is straight up Jungian theory set to music. Based on the Swiss psychiatrist's theory of synchronicity, in which two or more unrelated events occur simultaneously in a meaningful way.

Sting brings the notion to fruition by pairing the bleak, banality and anguish of a man's life with that of the Loch Ness Monster ominously coming ashore somewhere far away.

For a guy who repeats variations of 'day-oh' in his most of his songs, this is some pretty deep stuff. He paints a pretty good picture with words in the space of three minutes, jumping back and forth between the two events to draw the parallels.

The song simultaneously reached #1 in both the U.S. and U.K. Talk about synchronicity.


The Police- Synchronicity II
Posted by Actual Monkey at 1:52 PM