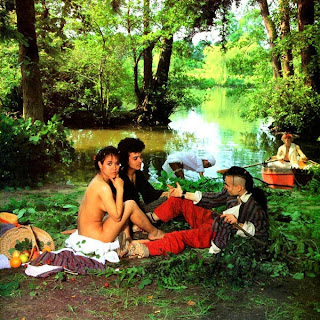 One of Malcolm McLaren's more successful experiments during the early days of New Wave was Bow Wow Wow. Formed in 1980 by the agent provocateur, it featured the enticing Burmese/English chanteuse, 14-year old Annabella Lwin on lead vocals. Cashing in on the Lolita factor, McLaren featured the underage Lwin fully nude on the cover of their 1981 LP 'See Jungle! See Jungle!, etc.' (See above). Most people had no idea it just another of McLaren's cheeky send-ups of refined culture/culture as commerce, or something like that. The composition of the cover photo was a reproduction of 19th century painter Edward Manet's 'The Luncheon on the Grass'. (See below). 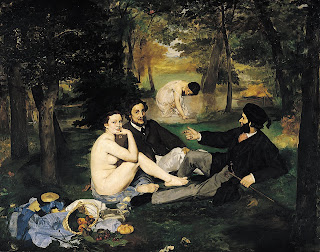 Beyond the sexpot appeal of Lwin and quasi-exploitation of Native Americans, McLaren (and the band) produced a string of killer singles. My favorite being the February '83 release 'Do You Wanna Hold Me?' The song peaked at #47 on the U.K. charts.

30 years later, the band (in different incarnations) continues to perform, albeit sporadically.