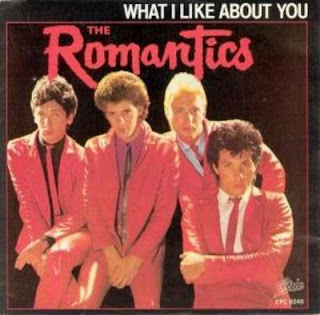 So, I'm in the Motor City takin' care of business, yet another of the seemingly endless perks associated with a career in pharmaceutical marketing. What better way to celebrate this road trip then with the ultimate 80's power-pop party anthem 'What I Like About You' by Detroit's own Romantics.

Formed on Valentine's Day 1977, the quartet channeled the British Invasion sound of the 60's with charged 3 minute bursts just like this one. A little more polished than the the Ramones, the Romantics enjoyed a string of radio-friendly hits throughout the early 80's including 'Talking In Your Sleep' and 'One In A Million'.

This particular song, sung by spiky-haired drummer Jimmy Marinos originally peaked at #48 on the Billboard charts in 1980 but gained even more notoriety after being featured as the theme in Budweiser's consumer advertising campaign towards the end of the decade. The song also enjoyed the #16 position on WLIR's top 200 songs of the 80's.

The Romantics- What I Like About You (1980, Nemperor Records)


What I Like About You- The Romantics
Posted by Actual Monkey at 6:17 PM