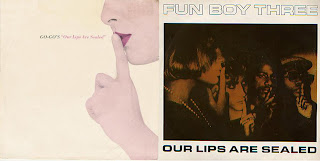 Since I've fallen a little behind with the 80's Days of Summer, today I'm throwing out a two-fer. A staple 80's New Wave hit and an example of power pop at it's best.

Co-written by Jane Weiden and Terry Hall, 'Our Lips Are Sealed' was a huge hit for both Weiden's Go-Go's in 1982 (reaching #47 on the Billboard singles chart) and a year later for Hall's Fun Boy Three (peaking at #7 on the U.K. singles chart).

The video for the Go-Go's version of the song helped propel the fledgling MTV into supernova. The video was played every hour on the hour when it was first released.

Although both versions are equally unique and amazing, I have to go with the Go-Go's on this one. The bass line is just too infectious.