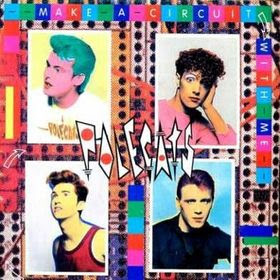 Today it's all about Rockabilly. This sub-genre of New Wave enjoyed a large resurgence in the late 70's and early 80's, and one of the bands leading the twangy revolution was the London trio, the Polecats. After a series of singles including covers of David Bowie's 'John, I'm Only Dancing' and T-Rex's 'Jeepster', they had their own bona fide hit, 1983's 'Make A Circuit With Me'.

While the sound of the tune was retro, the lyrics were as modern as Commodore 64.
Who needs love when you can have microprocessors? Can you say facebook?

The Polecats-Make A Circuit With Me (1983, Mercury Records)


The Polecats-Make A Circuit With Me
Posted by Actual Monkey at 12:01 AM