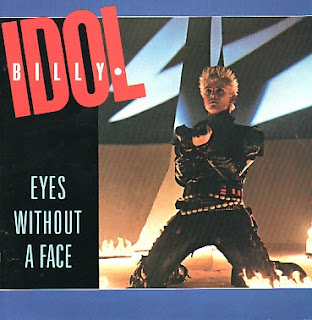 Sticking with the summer of 1984, today's New Wave classic comes to us from punk-pop bad boy Billy Idol. 'Eyes Without A Face' was the second single from his multi-platinum 'Rebel Yell' album, peaking at #4 on the Billboard charts.

After splitting from Generation X in 1981, Idol achieved breakthrough success with the release of Rebel Yell. His crossover pop-punk was mainstream accessible–mohawks for the masses.

Singing backup on the track is French chanteuse Perri Lister. Lister was an 'it' girl back in the early 80's, appearing is several films as well as popping up in the occasional music vid. Her backup credits also include work with Visage.


Billy Idol- Eyes Without A Face
Posted by Actual Monkey at 2:17 PM