Hurry boy, its waiting there for you 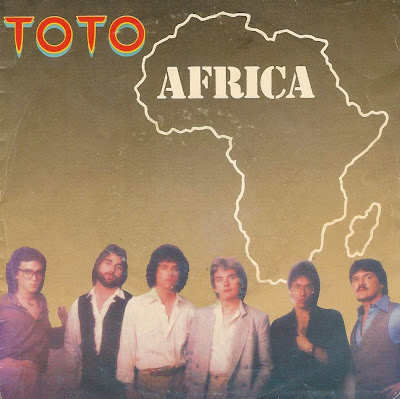 On this day in 1983, Toto held the No. 1 position on Billboard's Hot 100 chart with the power-ballad, Africa. The song was one of three to make the charts, all from their Grammy winning, multi-platinum LP, Toto IV (Columbia). No small feat for a little furry dog.

Africa would become the band's only No.1, and surprisingly, it almost didn't get released. The following is lifted from Wiki:

It was almost cut from the Toto IV record prior to its release. Having spent an incredible amount of time producing the tune, the band became so tired of the song that they didn’t want it on the album. The song itself was very different from anything the band had done before, and some members felt that it didn’t sound like Toto.

Recorded prior to the rise in popularity of World Music, the song doesn't even pretend to sound anything like or attempt to incorporate any aspects of authentic African music. Instead, with it's power chords, swirling synthesizer and cow bell it guaranteed itself a spot on the charts. Joseph Conrad be damned.

It should also be noted that the song contains one of the worst lyrics ever included in a pop song (as voted in a BBC poll).

"The wild dogs cry out in the night, As they grow restless longing for some solitary company, I know that I must do what's right, Sure as Kilimanjaro rises like Olympus above the Serengeti."

I would tend to agree, it's as pretentious and cerebral as you can get in a four-minute pop song.

The band itself was an assemblage of gifted session players whose sound was akin to that of Steely Dan, utilizing an amalgam of styles including Pop, Rock, Jazz, Soft-Rock and Progressive in crafting their music. Suffice to say they were an anonymous bunch with no defining personality or sound. The song (and album) represented the high water mark for the group, and although they never repeated the chart successes of Toto IV, they remained active, recording and touring, in different iteration until 2007.

Recently, the song has experienced a resurgence in popularity thanks to its inclusion by the a capella group Straight No Chaser's comic interpretation of the 12 Days of Christmas. In addition, the group included a bona fide cover on their 2008 release Holiday Spirits (Atlantic). Proving that a bad joke is a bad joke, no matter who's telling it.