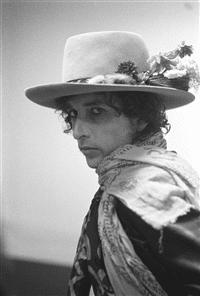 On this day in 1975, Bob Dylan released the ultimate breakup record, Blood On the Tracks (Columbia). My favorite Dylan album, it is his penultimate expression as a singer/songwriter. It's achingly personal and simultaneously accessible. Taste the pain.

Although Dylan has denied the album is autobiographical, it is widely accepted the album is pure confessional, a reflection of a tumultuous period in his life, underscored by the separation from his wife Sara.

Not unlike the cathartic nature of the record replete with drastic mood swings, Dylan had a change of heart just before the LP's scheduled release and pulled the record in order to re-cut several tracks, subsequently discarding his simple, concise versions for richer, more polished renditions. IMHO, I think the tangible intimacy of the original tracks is lost amid the lavish productions on the official Columbia release. Ironically, the record hit store shelves just prior to Valentine's Day,

An absolute cornerstone in any collection, Blood On The Tracks stands as the best lonely hearts album of all time.

Over the last 15 years or so, Dylan's 21st century doppelganger, Beck Hansen has set himself apart from other contemporary singer/songwriters with an eclectic discography, displaying his deft musicianship and a maturity beyond his years.

Like Dylan, Beck released his own breakup record, the 2002 opus Sea Change (Geffen), which he acknowledged was inspired by his split with long time squeeze, Leigh Limon. A sucker for sad songs, Sea Change is another of my all-time favorite albums.

Both artists possess a chameleon-like ability to exploit whatever style of music that happens to tickle their fancy. The key to their success is the underlying mastery of their songwriting capabilities.

So get yourself a box of hankies, it's gonna be a long, sad night.

Update: It has come to my attention that the correct release date of Blood On The Tracks was January 17, 1975. Since I was all of 7 years old, I was not on line at Record World to get my copy in vinyl, and carelessly cited the Internet as my source. Pure Idiot Wind. I'll trust an astute visitor to correct me in necessary.

Forever evolving as an artist while never leaving well enough alone, check Zimmy as he tweaks some of his lyrics and arrangements on the following tracks:


The times they are a-changin' but it's uncanny how Beck emulates Dylan some 40+ years later:

Posted by Actual Monkey at 8:46 PM