all things must pass 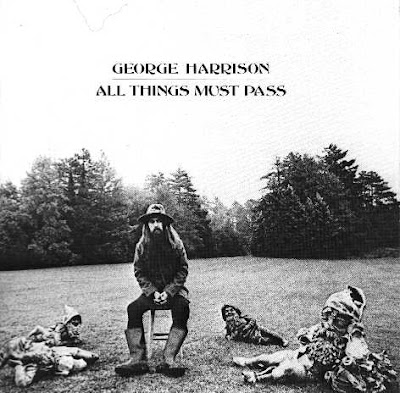 In observance of the seventh anniversary of the passing of my favorite Beatle, a short musing of my earliest musical memory.

'All Things Must Pass', was and is one of my all-time favorite albums. Probably top five, definintely top ten. The biggest reason is that it was on heavy rotation in our house when I was a kid. My mother was a big GH fan and I can remember spending time listening along with her, on our huge console stereo, I remember the spinning apple with the hole in the middle and the two vinyl disks, suspended in air, patiently waiting their turn for a spin. I was fascinated and somewhat frightened by the album cover. At three years old, I had no idea what a lawn gnome was but I swear I thought those freaky little creatures were real. That cover is still kinda creepy even today. I wonder if, being his first solo album post-fab four if was comfortable having other bodies around him. I still find it amazing that by the time the Beatles were finished, kaput, over, George Harrison was a mere 26 years old. What's more, he had stockpiled a collection of brilliant songs that would comprise the core (no pun intended) of this three-disc masterpiece.

As I grew up, my mother (and I) continued to enjoy his subsequent releases, 'Give Me Love (Give Me Peace On Earth) being our fave, but nothing quite compares to that time in my life, pre-school days spent listening to that LP with my mother.

I miss those days. I miss George Harrison. And I really, really miss my mom.

A few amazing performances by GH, notably the Concert for Bangladesh from August 1971, featuring Bob Dylan's first live performance since the Isle of Wight in 1969.

George Harrison/Bob Dylan- 'If Not For You' (Outtake Concert for Bangladesh, 1971)

Posted by Actual Monkey at 5:52 AM