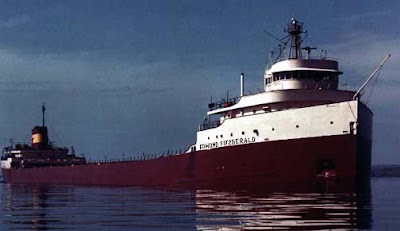 Just heard Gordon Lightfoot's 'The Wreck of the Edmund Fitzgerald' on the radio while driving from my brothers house in Pennsylvania the other day. Haven't heard that one in long time. Great song. One of those epics that draw you in. Not unlike Don McLean's 'American Pie', but not half as sentimental, or overplayed.

You might know the tale. On November 10th, 1975, an iron ore freighter went down in a nasty storm on Lake Superior. 29 men perished. How the boat sank still seems to be a bit of a mystery.

What resulted was a Newsweek article which provided the inspiration for the heroic ballad. With 14 verses and no chorus, it stretched over six minutes, not your typical Top 40 song. Nonetheless, it reached #2 for Lightfoot in November 1976, exactly one year after the tragedy.

So 33 years later, Actual Monkey takes a moment to honor those 29 who still reside 'In the ruins of her ice water mansion', as well as one of Canada's best living singer/songwriters.

Gordon Lightfoot- The Wreck of the Edmund Fitzgerald- 1979 Soundstage


The Wreck of the Edmund Fitzgerald- edited by Joseph Fulton

Posted by Actual Monkey at 8:16 AM