I once heard that the music you listen to as a kid, lets say between the ages of 14-17, will be the music you always go back to, the music you can't live without. As I approach the big 40, I find this to be truer and truer every day.

Lately, I find myself defaulting back to the tunes of my youth, 80's New Wave. Specifically Post-Punk. This genre was breaking and thriving just as I came of age, and although I had an appreciation of the classics, from 50's Rock and Roll through the British Invasion to Arena Rock of the 70's, Post-Punk was mine. Bands I could hear on the radio, then actually go see live. Growing up on Long Island I had the advantage of stations like WLIR, with forward thinking program directors like Denis McNamara who brought all this strange new music to the airwaves (anyone else remember 'Off the Boat' on Sunday nights?). The Metro area also had several strong college radio stations, with dedicated programming, like the Post-Punk Progressive Pop Party which aired locally on Hofstra's WVRC.

There were also some good record shops back then, Slipped Disc and Bleeker Bobs come to mind. They had everything, no matter how obscure.

To round out the experience, there were a host of clubs that catered to the kids, the bands and the sound. As soon as I was able to get my hands on a passable ID, I can remember night at The Peppermint Lounge, Malibu, My Father's Place and Spit, to name just a few.

The combination of radio, record stores and clubs made the music accessible and life revolved around the music.

Since my memories of those days are filled with endless bands and countless shows, I've decided to dedicate a collection of posts celebrating that time in my life and that period in music history.

For starters I begin with one of the 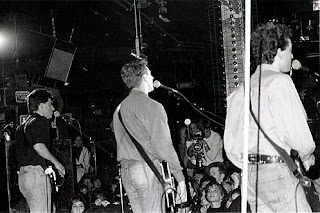 first post-punk bands I ever saw perform live. Scotland's own APB. This trio specialized in 'blue-eyed' funk. Led by the incomparable Ian Slater on bass and vocals, these guys had a driving punk-funk sound that was absolutely infectious. The tight, staccato guitar chords were the perfect counter to Slater's slap-bass style. Slater was the white equivalent of Bootsy Collins.

A local favorite, the band got heavy airplay on WLIR and performed some incredible gigs at all the local haunts. The first time I saw them was in 1984 at Malibu in Lido Beach. I still remember that they didn't go on till well after 1am, but played an amazing show. I saw them again in 1989 at Hofstra University and Spit in Levittown.

I guess I'm not the only one who thought these shows were epic. On the 20th anniversary re-release of 'Something To Believe In', disc 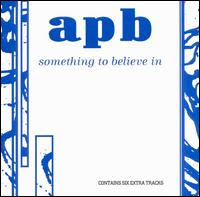 I missed out on their reunion shows a few years back, but hopefully I'll get to catch these guys again. If you get the opportunity, make it a point to check them out.

P.S. If you want to hear, see and learn more, head on over to The Post-Punk Progressive Pop Party blog. They are included in my links, or you can click here.