Transmissions from an Actual Monkey 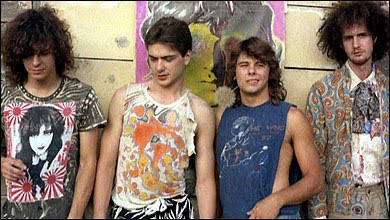 To celebrate Embryonic, the 12th release from Oklahoma's native sons, The Flaming Lips, AM is dedicating a bunch of postings to the fearless freaks. Join with us as we explore the evolution of the Lips. See and hear how they have matured and mutated from haphazard, callow guitar rock, to intricate, cacophonous exuberance.

We begin with the LP that got me sold on the Lips, 1993's Transmissions from a Satellite Heart. Caught in the maelstrom of the early 90's grunge movement, when just about every major was desperately trying to sign the next Nirvana, Transmissions was a refreshing departure from the typical Seattle angst-ridden fare. It was also somewhat of a commercial success for the band who had garnered a following with their five previous releases.

Loose, raucous and noisy like Flipper, the Lips maximized their slacker aplomb and happy-dicked it through a collection of silly songs. Yes, right smack in the middle of the wails of Kurt Cobain and the growls of Billy Corgan, Wayne Coyne sang happy songs that were fun to listen to. Like one big giggly bong hit, Transmissions delivered a WTF? levity and gave everyone the munchies for more.

Hereto, glimpses of the weird, wondrous things to come? Perhaps.

Posted by Actual Monkey at 5:21 PM