I say captain, I say wot 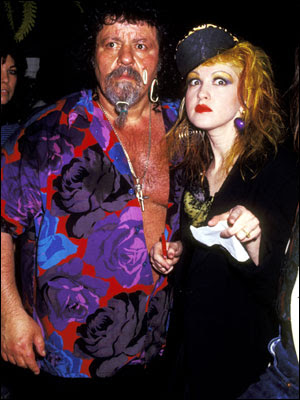 There are no coincidences. The same day the monkey goes back online, the world suffers the catastrophic loss of Rock-N-Wrestling's greatest ambassador, 'Captain' Lou Albano.

Courage, we are here for you.

Before the WWF became the frightening, steroid-fueled juggernaut that it is today, a quirky little girl from the boroughs, with a thick Queens accent got a little help from Captain Lou (and WWF owner Vince McMahon) to launch her career and at the same time, successfully merge the world of pop music and professional wrestling.

Whether such a pairing should even qualify as successful is another question altogether.

The pile driver of the Rock-N-Wrestling frenzy was 1985's cover of Wilson Pickett's classic, Land of 1000 Dances. There was more juice on that set than an Anita Bryant commercial.

Thankfully, mercifully, the Rock-N-Wrestling movement was eventually put in a sleeper hold and remained down for the count. Albano went on to manage, among other craptastic bands, the lame 1970's hold-overs, NRBQ. They even wrote a lame song about him.

Posted by Actual Monkey at 6:06 PM