How do you call your loverboy? 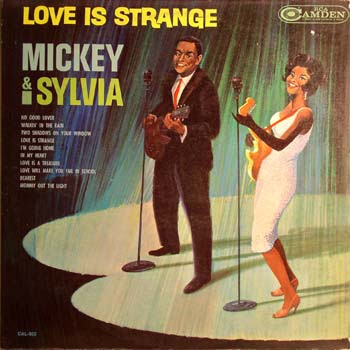 On this day in 1957, the duo known as Mickey and Silvia recorded the twangy, tantalizing classic Love Is Strange. The song was released on Groove Records and peaked at #11 on the Billboard Pop Charts.

The song was written by Bo Diddly under an assumed name (Ethel Smith, his wife) and recorded by guitar teacher McHouston "Guitar" Baker and a student of his, Sylvia Vanderpool. Inspired by the success of Les Paul and Mary Ford, the duo would only chart once, but continue to record together until 1965.

Silvia would go on to success as a solo artist. in 1973 her hit Pillow Talk reached #1 on the R&B charts. She is also credited with helping form the first rap label, Sugarhill Records.

As for the song, it has been covered by the likes of Buddy Holly, Lonny Donegan, Sonny & Cher, Paul McCartney and Wings, Kenny Rogers and Dolly Parton as well as Everything But The Girl.

Still an amazing track, it's sultry melody, latin rhythms and trebly, mono recording have frozen it in time, a time when Rock and Roll was new, and sexy.

And remember, nobody puts Baby in a corner.

Original
Buddy Holly
Paul McCartney & Wings
Everything But The Girl


Everything But The Girl- Love Is Strange

Everything But the Girl -- Love is Strange