A guilty pleasure or a legitimate sub-genre of pop? I have always pondered the question, never arrived at an answer but continue to enjoy the wonderful hook-filled songs of the Power Pop period. This little diddy from London pub band the Motors, reached a respectable #4 across the pond. Formed in 1977 by Nick Garvey and Andy McMaster, later joined by Bram Tchaikovsky and Ricky Slaughter the band enjoyed only limited success. When it came time for final call, onl 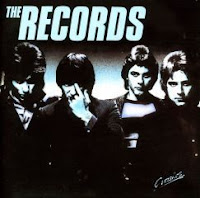 y Tchaikovsky went on to further achievements (1979's 'Girl Of My Dreams).

I've also included a song I have always loved. The Records 'Starry Eyes' from 1979. To this day I'm not sure of the history behind this song, but pop music about the pop music business makes for a great pop song. Not unlike The Beatles' 'Ballad of John and Yoko', this cautionary tale is delivered in a perfect, time tested, radio friendly three minute format. Follow the link to bliss.

One last thing. The Top of The Pops clip. What is with that Andy Gibb peroxide quaff on host Jimmy Sayville? A baton? Fingerless vinyl gloves? I think I really missed out on the whole Qualude thing.