Those summer nights are callin' 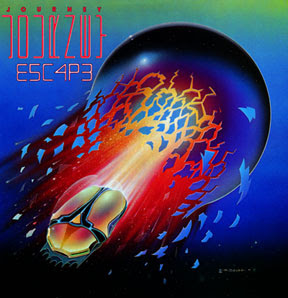 One on my personal summer faves has always been Journey's 'Stone In Love'. One of the few non-charting songs from 1981's Escape, the song to me is both prophetic and ironic.Here I am almost 30 years later reminiscing about those crazy nights in my own youth.

From what I can still clearly remember about the summer of '81, it was the first year I didn't spend at our summer house in the Poconos, instead forced to attend summer school at what we affectionately referred to as 'Camp Mineola'. Now I can't remember who I was dating back then, but there is no doubt she was a blue jean girl.

Besides stewing in my own juices in July–in a high school–without air conditioning, I can recall feasting on a steady diet of power chords. And there was plenty to be had: Van Halen's Fair Warning, Billy Squire's Don't Say No, Ozzy's Diary of a Madman, Rush's Moving Pictures, Foreigner's 4, and Def Leppard's High and Dry rocked my summer of 1981.

But the album that got the most play was Escape. Between Steve Perry's explosive vocals, and Neal Schon's soaring leads, the album was an instant classic for me and AOR stations across the country. It could be argued that Journey and Van Halen (both at their zenith) shared the monarchy as kings of arena rock.

I recently fashioned myself a Journey playlist and have been listening to Escape over and over. A little over-produced (the style of the day) and a lot adolescent, it still holds up to a serious session of air guitar.

Posted by Actual Monkey at 6:14 PM