Pay To Play-Mustang with a broken neck 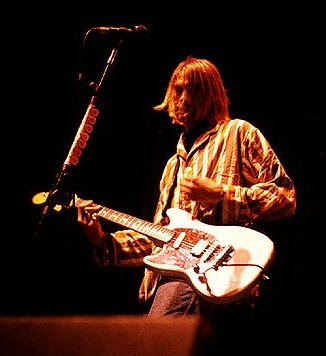 A few months back I posted about the continued earning potential of Kurt Cobain. I came across this related story the other day (from the AP):

An unidentified private collector bought the guitar, according to Jacob McMurray, senior curator at the Experience Music Project in Seattle.

"It's a really cool-looking guitar because it's smashed and held together with duct tape and Kurt Cobain wrote on it," McMurray said on Tuesday.

"There's not a huge amount of broken Nirvana guitars out there," he added.

After breaking the Fender Mustang guitar on stage while on tour in New Jersey in the late 1980s, Cobain needed another one and made a trade with Sluggo, the punk rocker who recently sold the damaged instrument.

At that point, grunge band Nirvana was living hand-to-mouth. Cobain was staying with Sluggo, who goes by a single name and played with The Grannies and Hullabaloo, and his girlfriend.

Nirvana had its big breakthrough with Smells Like Teen Spirit in 1991. Cobain died in 1994.

Helen Hall, a broker in England, says a Cobain guitar sold for a higher price in 2006, when his Mosrite Gospel Mark IV guitar went for $131,000 US at auction.

I wonder if it was a lefty or rightie?

Posted by Actual Monkey at 4:40 PM