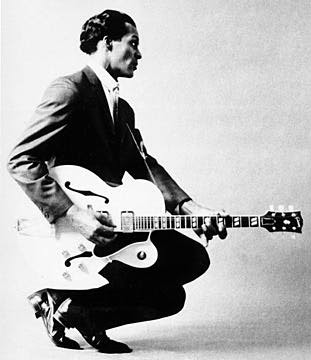 Just in St. Louis for an overnighter so what better way to celebrate than with the music of one of the Gateway City's prodigal sons.

Although steeped in the history of Jazz (Scott Joplin, Miles Davis, etc.), St. Louis has had it's fair share of legendary rockers. Among then, the absolute standout is Chuck Berry. Rock's first badass (and badboy) lead guitarist, Berry's music was so damn good, his message so universal and appealing that it's just as relevant and kickass today as it was over 50 years ago. To say he was a/the seminal, influential rocker doesn't even begin to do him justice.

Posted by Actual Monkey at 6:40 PM