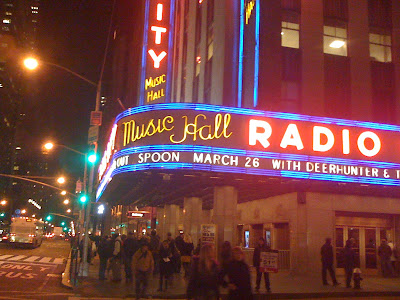 So what do you do when some drunk hipster asshole touches your woman? I had the opportunity to find out first hand this past weekend. Me and the Mrs. were in attendance at Radio City for the Spoon show. About 15 minutes before the show, this drunken tool sitting behind us decides to compliment her on her upper back tat. No harm, no foul. But this dick head gets touchy and proceeds to move her hair out of the way to get a better look, then goes so far as to touch her, and run his hand across her ink. Creepy and inappropriate, but excusable considering he was totally wasted and his gf/wife was apologizing up and down for his behavior. So I do nothing. We continue to wait patiently for the Spoon to take the stage. About 5 minutes later, he's at it again. He leans in and reaches towards the back of her neck, and starts to touch her, again. Before you can say misdemeanor groping, I am all over this guy like a cheap suit. I proceed to grab him by the throat and push him back in his seat. He's so out of it, he hardly has any idea he's being throttled. His wife is panicked and begs for me to let him go. After telling him in so many words to keep his fucking hands to himself, I release my steely, death-like grip and turn around. Little did I know I had created a scene. I'm not sure if it was the intervention of security or by their own volition, but the blitzed hipster and his woman beat it outta there.

And now for the review.

On the heels of their latest release, Transference, Austin's darling Indie rockers Spoon have achieved a status that while often coveted, is also frequently shunned. After over a decade of being an 'it' band, they have become and 'are' band. Britt Daniels and the other guys whose names no one has ever bothered to learn have spent the better part of almost two decades sharpening their musical acumen, the results: riff driven and angular, geometrically precise to a point, akin to to an isosceles triangle. A few complimentary angles, but one side just doesn't fit. Ironically, This is what has allowed Spoon to maintain both its congruency and edge at the same time. The thing about Spoon, for me is, I don’t know what you call it, but it’s more than just being under the influence. In their songs you hear bits and pieces that you know you’ve heard before, just not this way. hard to explain, but great to listen to.

After a drawn out and over indulgent sonic assault by Deerhunter, reminiscent of Sonic Youth in their heyday (did they ever really have a heyday?), Mr. Daniels et. all took the stage and almost immediately ripped into the three most biting tracks from Transference; The Mystery Zone, Written In Reverse and Got Nuffin. Suffice to say they can rock, rock very hard.

Considering their incumbency in the pantheon of Indie rock, replete with seven albums spanning their 17 year career, they possess an uncanny ability to deftly move from tune to tune, without so much as a hiccup, or miscued reverb pedal slap. The band, with some help from Fiery Furnaces’ Eleanor Friedberger and Wolf Parade’s Dan Boeckner displayed the agility to rock a hall as cavernous as Radio City while keeping the affair intimate (and loud) enough to satisfy those of us in the second balcony.

The highlight of the night, outside of physically assaulting a total stranger, was the horn section. They added the necessary oomph required to deliver the goods at a venue such as Radio City.

All and all a good show, if you learn keep your fucking hands to yourself.
I’m just sayin’.

Spoon, Radio City Music Hall, 26 March, 2010:
Me and the Bean (Britt Solo)
The Mystery Zone
Written In Reverse
Got Nuffin
My Mathematical Mind
Don’t Make Me a Target
Ghost Of You Lingers
Love Song (The Damned Cover)
Is Love Forever?
Waiting To Know You (Fiery Furnaces) w/Eleanor Friedberger of the FF
Someone Something (w/ Eleanor Friedberger of the FF)
The Beast and Dragon, Adored
Don’t You Evah
I Summon You
Nobody Gets Me But You
You Got Yr. Cherry Bomb
Rhythm and Soul
Jonathon Fisk
The Underdog
Black Like Me
Encore:
Trouble Comes Running
Modern World (Wolf Parade) w/ Dan Boeckner of Wolf Parade
I Saw The Light (Dan Boeckner on guitar)
Small Stakes
Posted by Actual Monkey at 4:59 PM

Is it going to make you mad if I touch your wife's tattoo?

you get a free pass