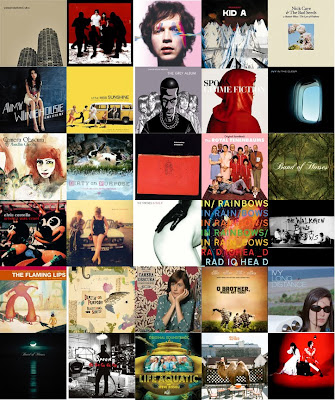 So many lists, so little time. It seems like only yesterday that KID A was making our mouths water in anticipation of what the 21st century had in store. Well here we are 8+ years later and hindsight is 20/20 last time I checked.

It was an amazing 10 years of music. As the potency of traditional pop became weaker and weaker, virulent new strains emerged. Most from down the road in Brooklyn. If nothing else, New York's hippest borough became the epicenter of music in the aughts. But more on that another time. First, the list.

My list is a lot like other lists, but it's all mine. It does not have obligatory inclusions paying homage to stadium rock gods, nor the 'must have Rap album of 2005'. My list contains the records I have not stopped listening to since the decade commenced. Since it's ridiculous and impossible to say one record is better than all the rest, the list is not in any specific order, nor is it numbered. Each holds something intangible to me, and hopefully for some of you as well. If you've not heard of any of the following, not to worry, the decade may be over but the music will be here forever. A truly great album has no shelf life. Yankee Hotel Foxtrot sounds just as good now as it did waaaay back in '02.

That said, we aught to take a little time and reminisce.

Wilco- Yankee Hotel Foxtrot/A Ghost Is Born/Kicking Television/Sky Blue Sky/ Wilco, The Album (2002,04,05,07,09, Nonesuch)
I know I shouldn't play favorites, but Wilco ruled the decade. YHF, followed up by A Ghost is Born, Kicking Television (best live album of the decade), Sky Blue Sky and the eponomous Wilco. The garnered three Grammy wins (like that really means shit) and are nominated for a fourth for their last release. They fought their label, substance abuse and each other and came out on the other side as America’s rock band. A full-fledged crossover, worthy of the accolades and critical acclaim heaped upon them. On top of that, some seriously talented musicians who are better live and lucky for us, love touring. The best shows I saw over the last 10 years were the half dozen Wilco shows I attended (and the two Radiohead gigs at Liberty State Park).

I Am Trying To Break Your Heart


Nick Cave and the Bad Seeds- Abbatoir Blues/Lyre of Orpheus (Mute, 2004)
Mr. Cave's most ambitious offering of the decade, if not his career. This guy is thisclose to having his own cult.

Get Ready For Love


The White Stripes- White Blood Cells/Elephant (2001, 2003, V2 Records)
No sophomore slump from the troubadour of power chords. White Blood Cells, their second release put them squarely on the map, Elephant established them as a sovereign nation of kicking ass. Mr. White runs a close second to Wilco for owning the aughts.

The Hardest Button To Button

Flaming Lips - Do You Realize??

Beck- Sea Change (2002, Geffen)
Blood on the Tracks for a whole new generation of broken hearts.


Radiohead- Kid A/Amnesiac/In Rainbows (2000, 2001, 2007, Parlophone Capitol
Fairly obvious, but this band ruled the aughts and my iPod, with the exception of '04's hiccup Hail to the Thief.
Also, two of the best shows I saw all decade. New Jersey was good for something.


Spoon- Gimme Fiction/Ga Ga Ga Ga Ga (2005, 2007 Merge)
I discovered Spoon early in the decade and have summoned them ever since.

Everything Hits At Once


Danger Mouse (Jay Z/Beatles)- The Grey Album (2004)
I pretty much hate rap, but this mashup changed all that for me. The Fab Four as break beats, brilliant!


Dirty on Purpose- Sleep Late for a Better Tomorrow/ Hallelujah Sirens (2004, 2006 North Street Records)
My favorite 'new' band of the decade. I never understood why they didn't blow up, rather they imploded and called it quits last year. Still, I relish their dreamy sounds.


Band of Horses- Everything All The Time/ Cease to Begin (2005, 2007 Sub Pop Records)
My second favorite new band of the last ten years. Be proud you're a rebel, cause the South's gonna do it again. Two words: Glimmering reverb.

No One's Gonna Love You


The Strokes- Is This it (2001, RCA Records)
The right band at the right time. Before Justin Timberlake brought back sexy, these guys brought back garage rock and revived the New York scene. Sort of. IMHO, they were a one hit wonder. But it was a great LP.


The Walkmen- Bows and Arrows (2004, Record Collection)
The best follow-up album of the aughts. At once coarse and vulgar while still sublime and melodic.

If Looks Could Kill


Ivy- Long Distance/In the Clear (2001, 2005 Nettwerk)
I stumbled them by accident and fell in love with their clean, lush Synthpop. I don't know what happened to them and unfortunately never got to see them perform live. If you watched any of the twentysomething series on the WB or MTV, chances are there was an Ivy track included.

Edge Of The Ocean

Elvis Costello- When I Was Cruel (2002, Island)
The master maintains his relevance.

Amy Winehouse- Back To Black (2006, Universal Republic)
She is the hot mess. Adding insult to injury, she received the musical kiss of death, Grammy for best new artist, see also: Lauryn Hill.

Various Artists- O Brother, Where Art Thou? Soundtrack (2000, Mercury)
Old Timey music! I tell you what!

Various Artists- The Life Aquatic with Steve Zissou Soundtrack (2004, Hollywood)
Albeit not all the songs on Wes Anderson's sountracks were recorded in the past ten years, these compilations got me looking for and listening to more b-sides.
Posted by Actual Monkey at 7:31 PM