It's too late to leave- Sheffield then and now 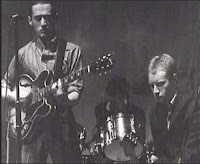 My theory stands about pop music. Well, good, purpose-driven pop music at least. The more severe the socio-economic climate, the better the music. It also helps if conservatives are in power. This hypothesis can be applied to just about all British pop music from the British Invasion onward. The story is the same, angst-ridden, lower income teens looking for a way up and a way out pick up a guitar, or in this case a Roland CR-78, and form a band. This theory can also be applied to American music as well. I site the early work of R.E.M. to illustrate the point. They created their best music during the Reagan/Bush 1 administrations. It's really a simple theory. When things are bad, or perceived to be bad, there's plenty to sing about, and nothing to lose.

My theory is further perpetuated by location. Where you are and what's going on (or not going on) helps percolate a musical scene. Motown comes to mind as a prime example, but next to Hitsville USA, I can't think of another specific geographic locale responsible for producing such a prolific amount of pop music as Sheffield, England. Birthplace of the Post-Punk, Synthpop movement and home to countless 80's bands like ABC, Heaven 17, and the Human League (as well as hair metal gods, Def Leppard), Sheffield has solidified itself in the annals of pop music lore. Manchester pales by comparison.

It's of interest that the town still manages to export talent to our shores. Check out newcomers Arctic Monkeys channeling the energy, if not the sound of the Jam. But we all know they were from Surrey.

Worth a visit is Sheffield Vision, chronicling the rich musical legacy of the region. And if you want to see more, check out the documentary Made In Sheffield. There are some excellent interviews with all concerned parties including the legendary John Peel.

If only I had learned to play that damn Casiotone.


Sheffield's own Comsat Angels (pictured above) with their 1983 hit, Will You Stay Tonight

Posted by Actual Monkey at 6:16 AM

Fabulous post - I was just thinking about Heaven 17 the other day. Now when I think of them I can listen too.